Rewilding restores ecosystems by allowing natural processes self will and by allowing native species to enter into relationships with the landscape that facilitate the future survival of both the landscape and its species.
Regenerative farmers restore landscapes by observing the relationships of the wild that exist around them and functioning within them to create landscapes that sustain people into the future.  Essentially they are functioning as one of those native species.
Both types of restored landscape bear the same markers of ecosystem health - stability, diversity, productivity and resilience.  Both types of landscape also capture incredibly high levels of carbon dioxide from the atmosphere and convert it into soil fertility and both buffer against the effects of a destabilized climate.

''Both rewilding and regenerative agriculture can restore ecosystem functioning.  The main difference between them is the role that people play''​
​So what is the difference?  The perceived role of people.

In rewilded systems people are generally kept at arms length and in farmed systems we are incorporated and we see ourselves as sitting in the drivers seat.  But do we have to either be excluded or be the primary driver?  And can either of those extremes ever actually exist?
We have a tendency to view ourselves as separate from the natural world and this can be traced right back to Descartes in the 1600's (and beyond).  Rene Descartes, a very influential philosopher, believed that mind existed independent of matter, that the self was separate from the external and that cultured society was different from the surrounding 'wild'.  That people were either absent from a landscape or were controlling it to make it 'cultured'.  This view point has persisted and very much framed the debate within which rewilding has grown.  The other element of the framework surrounding rewilding is that 'cultured' landscapes are generally assumed to be conventionally managed.  That the type of farming practised is chemical based agribusiness which does have a devastating impact on wildlife.
Rewilding has tended to carry within it the feeling of human dominated landscapes needing to be separated from wild landscapes in order for the wild to be allowed its full expression.  This is often because wildlife, high level carnivores especially, are very easily disturbed by the presence of people and so in order to protect them people free landscapes are required. ​ 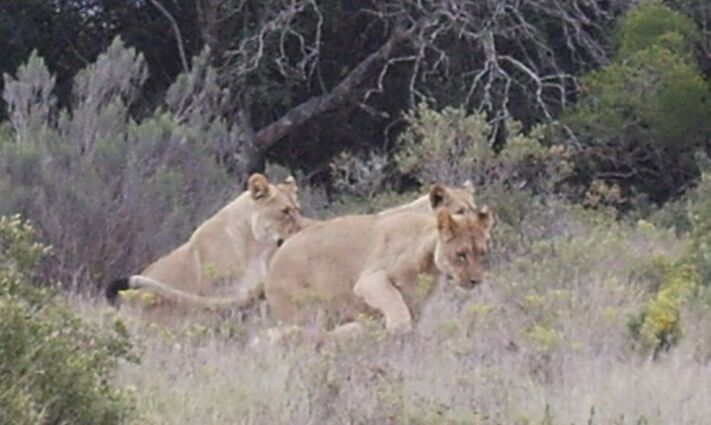 Lions - an example of a large predator that does best when allowed space away from people.
While this may apply in other places it does not fit well within Britain.  The species that we have left are, by definition, the ones that can coexist with people and there is currently quite a lot of opposition to reintroducing the ones that cannot coexist as easily, wolves being a prime example.

But what if we abandon this feeling of divide and loosen our assumption that people (and farmers) can only ever cause damage?  What does modern science tell us about the role of people in ecosystems?

Different species of Homo (primarily Homo heidelbergensis and Homo neanderthalensis) have moved in and out of Britain over the last 500,000 years hunting and foraging through ice ages and interglacials alike, imbedded within our landscapes like any other species.  Present but not in the driving seat.  When rewilders choose a point in history to recreate, from the elephant scrublands to the thickets of bears and wolves or the flooded valleys of beaver and elk, people in one form or another were present.  Our now extinct cousins existed alongside elephants and mammoths, fished in beaver wetlands and tussled with bears and hyenas for dry caves.
If we put down our old hang ups of difference and segregation from the natural world modern humans could be very good substitutes for our extinct ancestors.  We could fill the role that our ancestors played just as ponies now fill the role of the tarpan or cattle the role of the aurochs.

''Different species of human have lived in Britain for over 500,000 years alongside mammoths, elephants, bears and elk.  There is a strong case for including modern people in rewilded systems as surrogates for our now extinct ancestors as cattle stand in for their extinct ancestors, the aurochs''

​So what might our role have been?  If we were present but not in the sole drivers seat, what role within an ecosystem might we have been filling?
People as Keystone Species 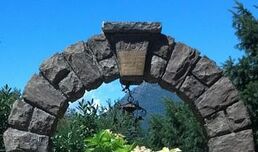 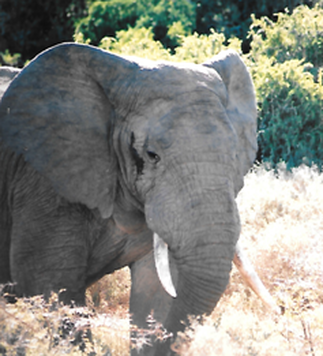 An African Elephant - a keystone species and a close relative of the native and now extinct straight tusked elephants
​Elephants are keystone species because of their ability to clear trees, wolves for their ability to regulate herbivore numbers and beavers for their consumption of stream side vegetation.
By this definition humans are also keystone species and the previous species of Homo that dwelt in Britain (and went extinct like many of our other keystone species) were likely carrying out important ecosystem roles.  Root-Bernstein and Ladle suggested in 2019 that all species of Homo are in fact keystone omnivores.  Keystone omnivores, such as bears and pigs, damp the oscillations in ecosystems by eating whatever is most abundant.  They ensure that vast populations of any one species don't develop by eating it.  They also cause small areas of disturbance as they forage and transport plant seeds about in their guts, seeding the land with berries and other fruits.
Although the goal of rewilding is often to reintroduce boar and bears, along with many other keystone species, to landscapes so that they may carry out their keystone roles once more people are very unwilling to allow the only surviving member of the genus Homo back in.  Just as cattle carry out the role of the aurochs, pigs carry out the role of the boar and ponies the role of the tarpan can people not carry out the role of the other species of Homo?

''People are keystone omnivores like bears and pigs.  Our ancestors once damped the oscillations in ecosystems by eating whatever was abundant''

People have been collecting natures abundance for hundreds of thousands of years, as keystone omnivores.  Damping oscillations and ensuring that systems run more steadily.  Britain lost, not just its bear and boar, but also its people.  Homo sapiens are currently barred from taking up our historic role in 'wild' ecosystems.
People as Ecosystem Engineers
People are not just keystone species we are also ecosystem engineers, a dual role that we share with beavers.  Ecosystem engineers create different types of habitat by their presence.  A beaver family for example can flood a valley turning a wood into a wetland, coral polyps create a reef in which many species can live and people can alter habitats in a great many ways, though forestry or farming.
Ecosystem engineers tend to have positive impacts on biodiversity if the type of habitat that they make is different from the prevailing habitat of the area.  For example a beaver family will increase diversity by creating a wetland in a forest or a cluster of coral polyps by creating an area of reef within otherwise open sea.  People can increase diversity if they fell small areas of trees in an otherwise wooded landscape or plant trees in an otherwise open landscape.

''People are ecosystem engineers.  When we farm we are engineering ecosystems just like beavers when they flood a valley.  This can increase biodiversity if done on the correct scale''
​
​​We often however take our ecosystem engineering too far and modify our clearing in a forest into a felled landscape with a few remnant trees turning something that has a positive impact when done locally into something that has a negative impact when widespread.  Scale is of prime importance.  In other words our engineered habitats, our farms, can foster diversity if they are themselves diverse and composed of a network of different habitat types within a background of unaltered habitat (rewilded land for example).  The very same farms, when allowed to run riot over a landscape obliterating what was there previously, can also have a negative impact upon diversity.  We can exist diffusely across a landscape as a keystone omnivore, gathering abundance, but when we are an ecosystem engineer, in the driving seat of an engineered area of habitat, we must have boundaries.  We must engineer at a biological, human, scale which is exactly what regenerative farmers do.
It is estimated that an average tree in the amazon would have taken well over 100 hours to chop down with a stone axe, with a steel axe a similar tree could be felled in less than 3 hours and with modern logging equipment, a matter of minuets.  It is the scale and speed of our engineering, far more than our presence or absence, that impacts habitats.
People as Hyper Keystone Species
Worm and Paine coined the term hyperkeystone species in 2016 to describe people.  The 'hyper' part refers to our ability to add or remove other keystone species allowing us to exert an even stronger level of impact on the systems around us.
​Rewilding is tied to the use of our hyperkeystone power to reintroduce lost keystone species into their native ranges or remove them from others.
A Human Role
Currently we only allow ourselves to exert our hyperkeystone power, our power that distinguishes us once more from the rest of the world, and we seem to attempt to deny the positive impacts of our former roles of keystone and engineer.
People can be amazingly beneficial to biodiversity, ecosystem stability and to carbon capture.  We can act to stabilise ecosystems by consuming whatever gets out of balance and we can also raise diversity by careful engineering, small scale farming.  Our absence robs ecosystems of the only species that could fill in for all of the many species of Homo that once occured across the globe and robs British ecosystems of one of our last keystone species.  Our supposed choice between absence or 'drivers seat position' also robs us of our opportunites of engaging with the wild, of entering into the relationships of the wild.  There are grey areas of land worked seasonally or sequentially and fringes to the edges of small scale farms where natures will and human will can intermingle.  Where we are neither absent nor in the drivers seat, where we just are.

''When we follow natures rules people can be amazingly benefiical.  Increasing biodiversity, capturing carbon dioxide from the atmosphere and helping to steady ecosystem functioning - we are a missing keystone and engineer across much of Britian''

It is not our presence or absence that reduces or boosts diversity or ecosystem health it is how aware we are of our Human Role in ecosystems and how we govern our keystone and engineering power.  The myriad landscapes and human roles within them, the shifting between wild and human will and properties that emerge from this interaction can all be restored as one, this is Holistic Restoration.  ​