The carbon that enters soils, both directly to feed soil life and also as plants die and decompose, represents a vast quantity of carbon that plants are pulling from the air and investing in fertile soils, to grow yet more plants that capture yet more carbon.  All of this plant biomass also feeds more or less all life on earth as herbivores eat plants and carnivores eat the herbivores.
It is essential therefore that the maximum quantity of plant biomass is encouraged; to capture carbon, feed wildlife and to enhance soil fertility.
​When trees are grown on their own their growth tends to be curtailed by a lack of available fertility (often nitrogen).  When pasture grows on its own its growth tends to be limited by its leaf surface area.  When trees and pasture are combined however in diverse scrub lands the maximum rate of plant growth can be achieved because the pasture and trees complement one another's abilities.

''Scrub land supports plants to grow very rapidly locking carbon away in soils and providing animals with a lot of food'' ​
​The earth also has a number of ways of confiscating a portion of the carbon that plants fix for much longer time periods.  Most of the biosphere is bathed in oxygen which means that much of the biomass created by plants can be eaten and broken down by animals and bacteria relatively quickly.  In water the breakdown process is very slow because oxygen is often less available.  In less than hospitable water bodies, such as the dark and cold depths of the ocean or the acidic pickle of an upland bog, the breakdown process can almost stop completely.
Wetlands act to capture the fertility and carbon contained within plants and store it for later.  As long as water is present the carbon and fertility are captured - paused in time.  As soon as the wetland is drained however decomposition can recommence often causing a massive surge in plant growth as the captured fertility is released.  When farmers drain wetlands we capitalise on this burst of productivity in the short term but this yield is at the expense of accruing carbon and fertility in the long run. 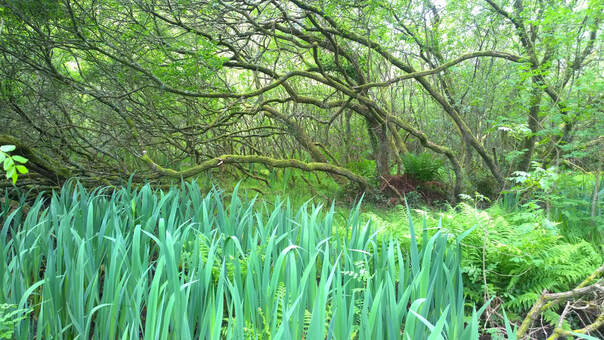 A carbon capturing and fertility holding wetland in the Derbyshire Dales
About 25% of Britain was once water logged, according to Oliver Rackham, and by restoring, rewilding, some of the wetland along our streams and rivers we could capture a massive quantity of carbon from the atmosphere and retain the fertility of our soils that currently washes out to sea down our canalised rivers.  A wetland network would also capture fertility for future farming and buffer against floods and droughts, something that will become increasingly valuable as climate change progresses and extreme weather events become more common.   ​